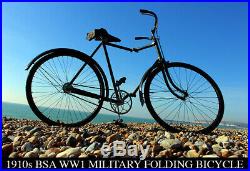 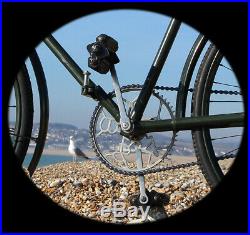 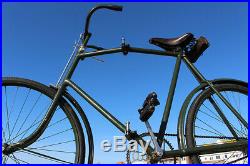 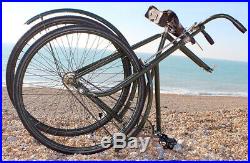 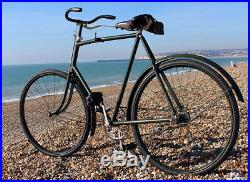 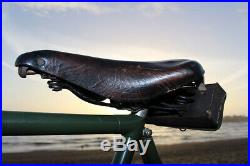 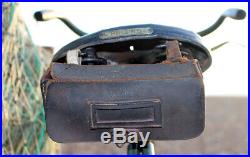 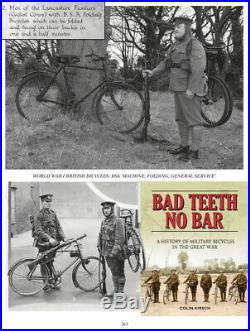 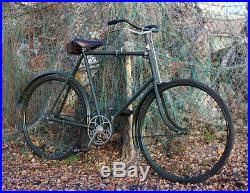 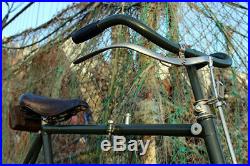 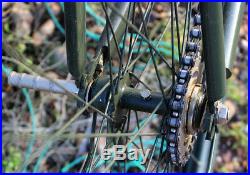 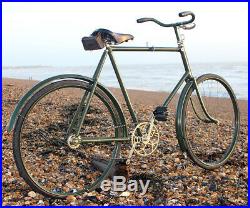 Over the next month I'll advertise a variety of vintage bicycles and you are. Welcome to make (realistic) offers on any of them.

1910s BSA WW1 MILITARY FOLDING BICYCLE. EXTREMELY RARE - HAVE YOU EVER SEEN ONE? The BSA Machine Folding, General Service commonly used as a military folding bicycle for carrying on soldiers backs during the First World War was a medium weight roadster with 26 inch wheels. But BSA also made a heavy duty version with 28 wheels, and its not known if these were made alongside the smaller frames, were first built before the war, or after the war ended. Although heavier to carry, the larger frame with 28 inch wheels was a much more robust machine for rough riding and less likely to get damaged when it was manhandled under wartime conditions. Every Military Model bicycle advertised by British cycle manufacturers was a similar heavy duty 28 wheel roadster (though not folding). And although the French and Italian military folding machines were small (with 24 wheels) they were not light. BSA would have faced a dilemma over whether to supply a folding machine lighter to carry but more prone to damage, or a heavier but more practical one for war use.

In my opinion, they built both sizes to provide the War Office with a choice that depended on requirements and destination. Theres no way to check exactly when this particular machine was manufactured, nor if it was supplied for military use (I can not see any markings).

But it is the design used by the British army during World War 1 and it is extremely hard to find any surviving examples of this model. They never come up for sale. If you want to own one, this is your opportunity.

This item is in the category "Collectibles\Transportation\Bicycles\Complete Bicycles". The seller is "groovydubber" and is located in Brighton. This item can be shipped worldwide.