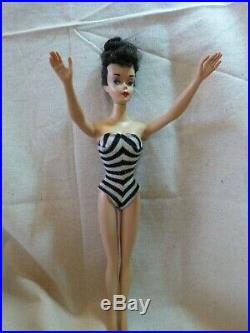 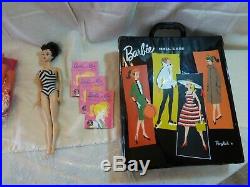 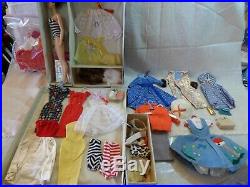 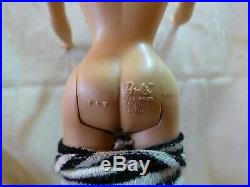 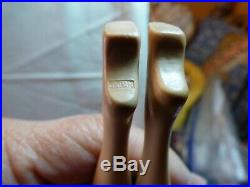 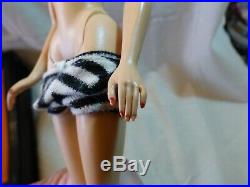 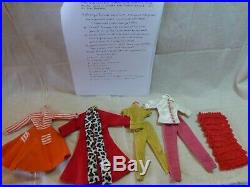 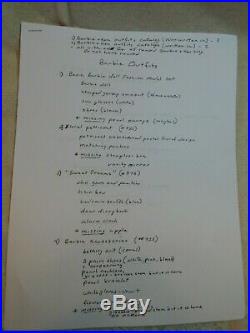 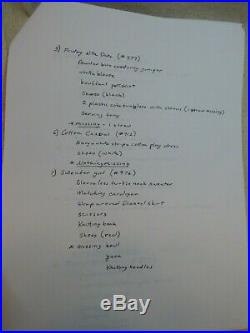 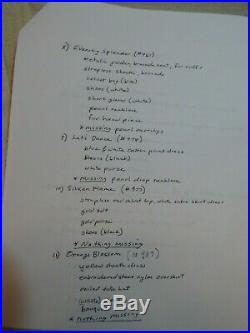 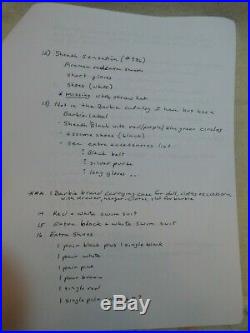 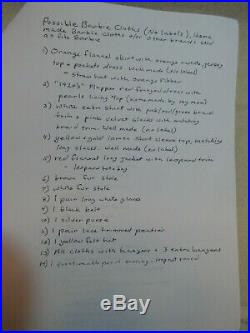 There is a LOT of stuff and I can only upload 12 pictures so message me for more. In particular more photos of Barbie herself, just message me, as you can see she looks pretty awesome, apparently my client was more interested in being outside than playing with her dolls.

In fact, we restrung several MDM ALEX Cissy's and others in mint condition so if she decides to sell them, do check back in my store in the future and be sure to follow me. Zoom in on the LAST 5 photos and you can read her hand written detailed inventory of EVERYTHING included in this sale. This is a NUMBER 3 Mattel circa 1959 Barbie, Brunette ponytail hair, poodle bangs and she has a pony tail BUT her mom turned it up into a bun many years ago that has relaxed a bit but I hesitated to undo it. MY feeling is to soak the hair and snip rubber bands and let it relax over time to get the pony tail back and it will probably be fine as it is not brittle. I use unscented fabric softener on later vintage dolls and it does wonders but you Barbie experts know what to do.

With THAT said, that is the only'flaw' I can see if you can even call it a flaw. She has most of her nail color, face color looks great, no earring green on ears as she has been stored without earrings on. I think there is only ONE of the bathing suit ensemble pearl earrings in the lot which would explain why she wasn't wearing any. In a way that is great, it saved the vinyl.

We considered listing all the outfits and accessories separately from the doll but that seems overwhelming to us, as some have all parts while some may miss an item here or there (again READ the pages of inventory)... So she opted to sell the ENTIRE lot with everything you will see/read about here. There is a 5 PAGE handwritten inventory!

A Barbie collector's dream. INCLUDED in this LISTING ARE. ONE 1959 # 3 Brunette Barbie DOLL in her BLACK AND WHITE bathing suit and the appropriate shoes, white sunglasses, and one pearl earring (missing the other pearl earring) in Excellent condition. 2 Additional striped Bathing suits, ONE B/W and one RED/W In addition there is a 4th Bathing suit! The Coral bathing suit--which is part of outfit #923, on inventory page one.

1 Original Barbie black vinyl case with handle and inside with drawer to hold accessories PLUS hangers for outfits and some extra hangers. 1 box of shoes and small accessories for the outfits. 1 drawer as part of the original case holding all of her other accessories Additional photos on request. THREE ORIGINAL Barbie / Ken Pink catalog Booklets showcasing the various outfits with prices, ONE booklet clean of marks, the other two marked by owner. ONE insert 45 Record advertisement (no record).

13 YES THIRTEEN Official Numbered Outfits as seen in the booklets SEE PHOTOS of itemized outfits in one of the big'group photos'. The accessories etc are in little boxes as I do NOT want to misplace any. Some were in the photos.

Anything missing from each outfit is mentioned in the inventory pages. Of the 13 numbered Outfits, 4 appear complete, the other 9 are missing an item or two maybe. It appears what is needed to complete the 13 catalog outfits are: one pearl earring, the stud type, plus another pair of the same although not really necessary as they can be used for either outfits, One little wax apple, one little handheld plastic vanity mirror, one soda straw, one bowl with yarn and knitting needles, one pearl drop necklace.

If we acquire any of these items we will update this listing. NOTE the BLACK SUNGLASSES listed by owner as missing/parts for #923 coral bathing suit outfit are actually ok, just one arm was re attached. NOTE the White Straw Hat listed as missing by owner for #986 Sheath Sensation is in fact in the accessories box. Again, SEE photo of the handwritten list of the itemized and numbered outfits. IN addition to the actual Mattel Barbie labeled outfits with ALL their accessories, there are SEVERAL additional misc'mystery' outfits as seen in one photo. She thinks one or two of these were made by the owner's mom, a seamstress, such as the red wool coat with fur collar, and Red Flapper style fringed dress. There are a total of 5 Other OUTFITS and misc items like a fur stole and a piece of white rabbit fur she used to wrap around Barbie's neck as a fur collar. YES as you can see this is a STAGGERING lot of amazing items all kept stored by the original owner since day one! She says she ironically was not that interested in playing with the doll as much as her mom liked making outfits... And you can see that by the condition of the clothing, some things look like new, it is amazing! I turned a few of the dresses over so you can see labels. DO not hesitate-- this is an AWESOME Item with enough outfits for a serious collector to fill any missing number of pieces or round out a collection OR start one.

And a rare item from an ORIGINAL OWNER. I had NO idea about certain doll bodies used with other heads! No question but some very helpful information for your consignment listing of this beautiful and rare vintage Ponytail Barbie. I'm an experienced vintage-Barbie collector.

This vintage PT Barbie is a transitional #2/#3. Used older parts of its Ponytail Barbies as the years went on.

Her legs are definitely from a #2 body (1959). Only on rare #2 vintage Ponytails (not all #2 Ponytails) was the name "JAPAN" incised in a rectangle on the sole of the right foot. This means that her entire body could be that of a #2 vintage PT Barbie doll. Now, please understand that ALL #2 vintage Ponytail Barbie dolls are automatically rare because Mattel made far fewer of them than the original (the #1's).

So, imagine: This vintage transitional #2/#3 PT Barbie is ultra-rare because she has a #2 body with "JAPAN" in a rectangle on the right foot's sole! So she definitely has #2's legs. And, because Mattel wouldn't have used #2 legs and #3 arms, it stands to reason that her arms and legs are #2's extremities.

Torso of both #2's and #1's tend to fade to white or ivory or sometimes w/slight pink tint. Both #2's and #1's have the "TM" on the right tush, so there's no way to prove that THIS vintage #2/#3 PT has the torso of a #2 as opposed to the torso of a #3. It IS possible that her entire body is a #2 body, with only her head a #3 head. The #2 vintage Ponytail body alone is rare w/o the extra-rarity of "JAPAN" in rectangle on sole! I needed to scrutinize the photos because I easily could see that her face is an early #3's face.

And, over the course of finding, purchasing and owning these dolls, I know that there are transitionals out there. Back in 1959, 1960 and 1961, Mattel didn't want to discard good or great parts. So, for example, when it stopped making the first Ponytail (what we now call the #1 -- 1959), the one with copper tubes in her feet (to fit with the earliest pedestal stand), the company wasn't going to toss out arms and torsos.

So for the next-issue Ponytail, Mattel used new legs (no copper tubes in feet) but the rest of the doll was identical: the type of vinyl-plastic that we now know fades, the dramatically arched eyebrows (which I'm guessing Mattel discontinued because those eyebrows with the come-hither eyes were too sexy), and nipples! Mattel discontinued nipples -- too sensual.

I had no idea we were under-valuing this doll, according to the expert... She is now listed appropriately. Thanks for stopping in and do check out my store if you want to see some wonderful Antique dolls, porcelain and other items. VTG #3HEAD #2BODY BARBIE BRUNETTE PT Case 13 OUTFITS ++ORIG OWNER" is in sale since Sunday, December 8, 2019. This item is in the category "Dolls & Bears\Dolls\Barbie Vintage (Pre-1973)\Vintage (Pre-1967)".

The seller is "oldblackdog" and is located in Colorado Springs, Colorado. This item can be shipped worldwide.