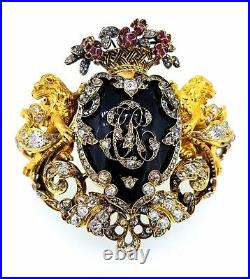 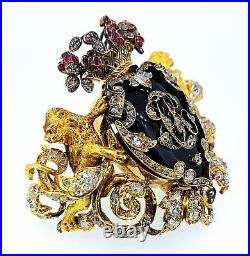 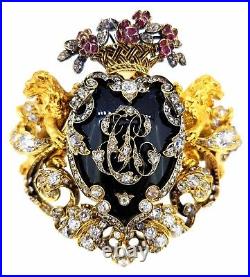 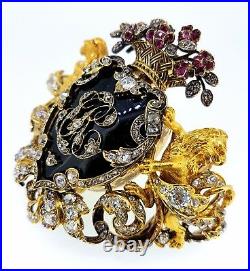 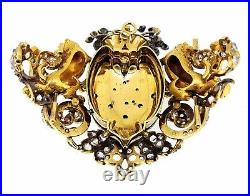 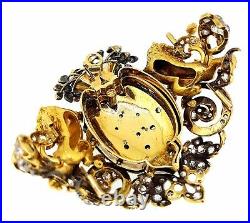 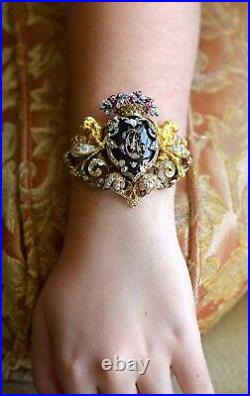 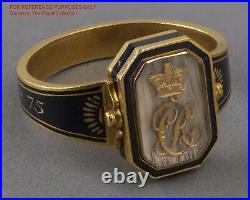 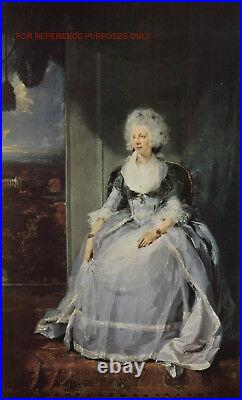 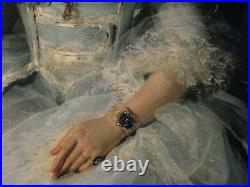 Ornament or bracelet depicts her Majestys diamond encrusted Royal monogram cypher on a black enamelled shield further accented by foliate diamond encrusted border decorations. The shield centerpiece is adorned by a pair of finely hand carved lion supporters on each side and topped by diamonds and rubies giardinetto flower basket. The whole composition is crafted with the utmost jewelry precision and glamour.

The lions holding both sides of the monogrammed shield further intervene with an extremely rich garnish decoration paved and encrusted with diamonds. There are nearly 250 round table cut and old European cut diamonds of various sizes having a total estimated diamond weight of about 20 carats. All diamonds have a superb sparkling white color and average VS2-SI1 clarity. There are further 42 fine Burmese rubies set into the blossoming flowers, having an estimated combined weight of about 1.5-2.0 carats. The dress ornament or bracelet itself is made of mixed high karat gold which tests over 21 karats (most likely precisely 21.6 karat gold), as well as some lower karat parts.

Gross weight is roughly about 100 grams and measures the enormous 71.5mm wide and 66.5mm tall. Although the present jewel almost completely covers a wrist (see photo), if it was used as a bracelet, it is missing its original clasp portion towards its base, the clasp being of either the bangle cuff type or three rows of pearls. This could easily be restored in case it was intended as a bracelet.

There is a pair of gold hinges at the reverse that are right on both sides of the lions tails, where a replacement clasp could be attached. On another hand, the jewel could very well be a part of a stomacher or another dress ornament, an extremely large brooch or even a hair ornament. Nevertheless, it is indeed an important Royal piece owned by the Queen herself and something that is rarely seen offered in public. The jewel has some transformable and interchanging parts, whereas the diamond encrusted monogram shield can be detached by the use of a screw and later used with another bracelet for example as its centerpiece.

This is allowed by two special hinge openings on both sides of the shield. In a Sir Thomas Lawrence contemporary painting of Queen Charlotte, she is portrayed wearing a pearl bracelet adorned with a black enamelled centerpiece that appears having an identical Royal monogram cypher on top. There is a very good possibility the artist had depicted that same bracelets black enamelled and monogrammed centerpiece shield, but being used as attached to a pearl bracelet. The shields black enamel is in nearly perfect condition apart from a tiny surface chip which is generally invisible to the naked eye. The ruby and diamond flower basket is the other part of the bracelet that is possible to detach through a screw with a hook on top.

Apart from being crafted in solid gold, the basket is further accented with delicate red enamel stripes. Most likely that part of the jewel was used as a pendant. Although apparently unmarked, the bracelet was likely crafted by the London based firm of Rundell & Bridge, who were appointed Royal Goldsmiths, Silversmiths, Jewelers and Medalists in 1797 and held the Royal Warrant until 1843. The Royal Goldsmiths served four monarchs: George III, George IV, William IV and Victoria.

In addition, their name was attributed to the'Rundell tiara', made for Princess Alexandra in 1863. There are a couple of images attached along with the present piece that are purely for reference purposes only in order to display the exact match of Queen Charlotte's personal monogram cypher. The object are property of the Royal Collection Trust and under no circumstance are related to the present offer. Charlotte of Mecklenburg-Strelitz (Sophia Charlotte; 19 May 1744 17 November 1818) was the wife of King George III. She was Queen of Great Britain and Ireland from their marriage until the union of the two kingdoms in 1801, after which she was Queen of the United Kingdom of Great Britain and Ireland until her death in 1818.

She was also the Electress of Hanover in the Holy Roman Empire until the promotion of her husband to King of Hanover on 12 October 1814, after which she was also queen consort of Hanover. Queen Charlotte was treated with particular savagery by cartoonists, who represented her as ugly, overdressed, over-fecund and avid for diamonds and pearls.

Her Majesty states her property to consist of a real estate in New Windsor, called the Lower Lodge, and of personals of various description; those of the greatest value being her jewels... Apparently the present jewel requires additional and profound research, but unfortunately we are in no position to initiate such an activity.

The item "RARE 18th C. Queen Charlotte own Diamond Dress Ornament or Bracelet Crown Jewel" is in sale since Tuesday, February 19, 2019. This item is in the category "Jewelry & Watches\Vintage & Antique Jewelry\Fine\Georgian, Pre-1837".

The seller is "vicbg" and is located in Wien. This item can be shipped worldwide.