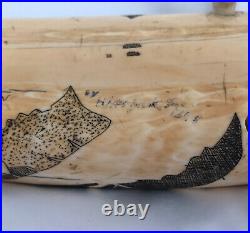 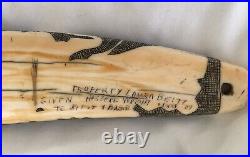 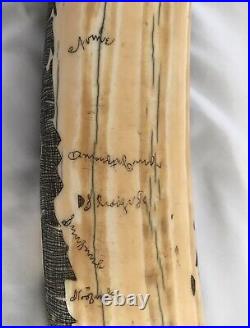 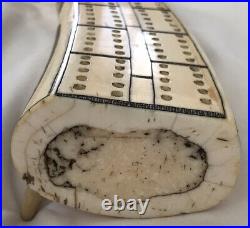 His actual birth date is not known. After his father died, Anyayak brought her children to Port Spencer for the annual matrimonial and trade fair. His sister Angyaya met her husband, and Angokwazhuk's future as an artist began to take shape. Though still young, Angokwazhuk earned a reputation as a skilled hunter and provided for his family on Big Diomede.

When Angokwazhuk's sister died, he and his mother moved to Little Diomede. It was here, on a hunting expedition with a partner, that Angokwazhuk's life changed forever. Drifting ice trapped the two men for almost a month that winter. His companion died, and after finally making it to shore, Angokwazhuk dragged himself home.

Both feet were completely frozen and eventually were amputated near the ankle. For the rest of his life, Angokwazhuk walked on two half-feet stumps.

His hunting skills were obviously hampered. To make matters worse, the relatives of his hunting partner believed Angokwazhuk had murdered his partner to survive the expedition. Scorned, crippled, and unable to provide for his family, Angokwazhuk focused his attention on another Eskimo tradition: ivory carving. In her book, Artists of the Tundra and the Sea, Dorothy Jean Ray wrote of "Happy Jack" Angokwazhuk's first recorded contact with white foreigners. "Ivory carving in this part of the world was nothing new, " Ray wrote. For almost two thousand years ancestors of the Bering Strait Eskimos had designed beautiful things of ivory. In researching and writing about Happy Jack, Ray has become the foremost authority on his work and identifying authentic pieces made by the artist. Walrus ivory and whalebone were first used for utilitarian purposes in Native Alaskan culture. In 1778, Captain James Cook collected drill bows that depicted some of the first artistic Eskimo carvings. But as Ray explained in her essay "Happy Jack and Guy Kakarook, Their Art and Their Heritage" in Eskimo Drawings, the Iñupiat tradition of ivory carving has a mysterious origin.

Before the Alaskan gold rush, Iñupiat contact with foreign white people was limited to the few whalers and adventurers who sailed the Bering Sea. Concerning Bodfish's first encounter with Angokwazhuk, Ray wrote, In spite of the language barrier he immediately took a great liking to the good-natured boy. He was greatly impressed by his ivory carvings, for although the ivory work of the Bering Strait Eskimos was known to be better than that of any other Eskimos of the world, this was marked by the stamp of genius. Angokwazhuk was reluctant to leave his home for San Francisco. Naturally, he loved and cherished the land most foreigners considered barren and uninhabitable.

However, with much prodding, Bodfish convinced Angokwazhuk to make the trip. The young man enjoyed the voyage so much that he would later make another.

Angokwazhuk's trip to San Francisco marked his introduction to white American culture and gave versatility to his art. Dorothy Ray summarized Happy Jack's nickname by writing, It was not only Happy Jack's carving ability that set the stage so successfully in those early years, but also his personality.

His nickname of Happy Jack was well chosen, for everyone recognized his optimistic and happy spirit, and some did not even suspect that his halting gait was the result of walking around on stumps of legs with the feet cut off. Happy Jack's carvings reflected his artistic ability to capture images from both Eskimo and white American culture. He carved walrus tusks to combine portraits of Eskimos and villages with cribbage boards. Happy Jack's innovative work suggested a masterful artist with incredible attention to detail. He copied magazine photos in his carvings and was frequently praised when they were more lifelike than the originals.

In the collection of essays titled Eskimo Drawings, Dorothy Jean Ray wrote again of the now-famous carver: Happy Jack was the first professional Alaskan Eskimo artist. He earned substantial income from his art, unlike the many part-time carvers who worked only when the mood struck or when they needed cash. By 1900, Happy Jack was again providing for his family, but now, he was unwittingly changing Eskimo art.

Two years after the first migrants of the Gold Rush, he moved to Nome and successfully traded with the flurry of miners. Consistent with his personable character, Happy Jack mentored aspiring artists with their own work. He became popular as both an artist and person, so much so that some unknown carvings may be attributed to him incorrectly. "Happy Jack" Angokwazhuk's innovative and masterful work heavily influenced future Alaskan Native artists before and after his death during the great influenza pandemic of 1918.

In her book, Artists of the Tundra and the Sea, Ray wrote, His willingness to try anything suggested to him was an important element in his popularity. Happy Jack was the first to recognize that ivory carving of the future was to be done for a different purpose and for a different culture than before.

This item is in the category "Collectibles\Cultures & Ethnicities\Native American: US\1800-1934\Other Nat. The seller is "rochellez" and is located in this country: US. This item can be shipped to United States.