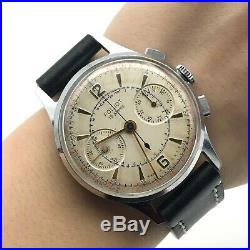 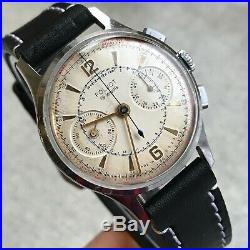 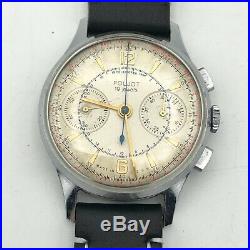 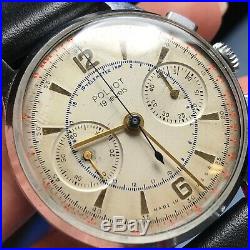 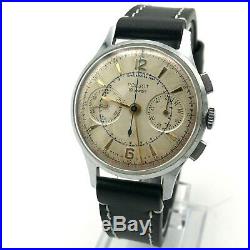 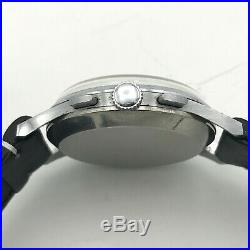 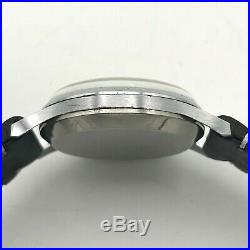 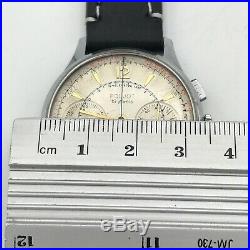 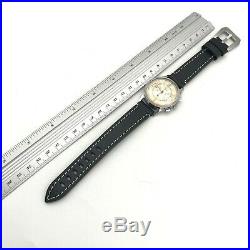 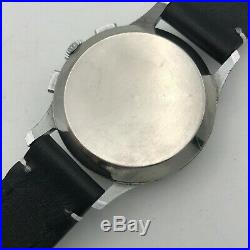 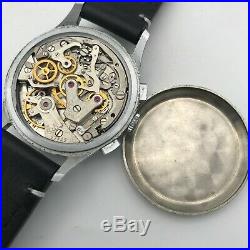 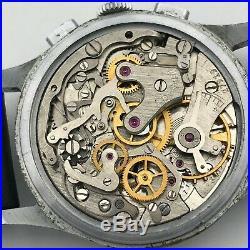 A vintage and extremely rare mechanical wristwatch Poljot "Strela" with 3017 mechanism with a chronograph. It's a later design with the inscription "Poljot" on the dial produced in the 1970s at the "First Moscow Watch Plant".

In the 1960s there was "Strela" inscription. Vintage and rare retro watch, about 50 years old. O start and to stop. Use the upper button on the right, to reset - the lower one. Tachymeter scale for computing a speed based on travel time or measuring distance based on speed.

Telemeter scale that is used to determine the distance from the observer to the sound source; this function is often used by the military to determine the distance to enemy artillery, by the time between the burst from the volley and the explosion. 19 jewels Soviet 3017 mechanism developed on the basis of the Swiss Venus 175 movement (or Venus 150), which was used in the chronograph for pilots Breitling Chronomat; a Soviet 3017 is a high-quality mechanism made on 19 jewels instead of 17 as in Venus mechanisms (there's the inscription "Made in the USSR" at 6 o'clock).

Serviced by a professional master. There is an opinion that "Strela" was intended exclusively for the command staff of the Air Force and was issued with military acceptance. Such watches were not on free market or were available in extremely limited quantities. Moreover "Strela" had been used by Soviet cosmonauts for over 20 years, so it gained a reputation as the Soviet Omega Speedmaster.

It was the first watch gone into outer space along with Alexei Leonov. In March 1965, with his partner Pavel Belyaev, he flew into space, where he carried out the first EVA in space history, where he spent 12 minutes. For its age (near 50 years old) the watch is in great condition, runs well and keeps time accurately.

The mechanism was serviced by a professional watch master. There're only minor scratches on the case, its back side and the buttons. The watch goes with a new leather strap. Look at all 12 photos! You'll get exactly what you see!

It's ready to wear. Can be a good gift or the great addition to a collection. If you have some questions just ask and we answer quickly.

See our other vintage & retro. We sell only ORIGINAL goods.

For our part, we guarantee neat packaging to minimize damage to the goods. BELEON LLC (DE, USA) wish you. The item "Vintage POLJOT Strela 3017 RARE Soviet Chronograph USSR Space Watch Leonov GIFT" is in sale since Tuesday, January 14, 2020. This item is in the category "Jewelry & Watches\Watches, Parts & Accessories\Wristwatches".

The seller is "beleon_66" and is located in Minsk. This item can be shipped worldwide.